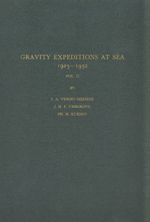 The interpretation of gravity anomalies is a subject about which the opinions are yet divided. This results from its many-sided character. The problem has no unique mathematical solution and so only the combination of the gravity data with data from other sides - in the first place geological and morphological data - can provide us with an interpretation that has a chance of being near the truth. So the cooperation of the geodesist with the geologist is imperatively required; an independent investigation of one of them risks to neglect facts and view-points that can only be known to the experienced specialist in his own branch.

The writer feels sincerely indebted to Dr. J.H.F. Umbgrove, Professor of Geology at Delft, for having been willing to take up this subject and to cooperate with the writer in trying to find an adequate interpretation of the gravity data in the East Indies. His wide knowledge of the subject guarantees the proposed solution to be compatible with what is known nowadays about the geology of this area. Chapters VI and VII contain the results of his important and comprehensive study.

The writer wishes likewise to acknowledge gratefully the cooperation of Mr. P.M. van Riel, Director of the Meteorological Institute of De Bilt, and of Dr. PH.H. Kuenen, Geologist at the University of Leiden, resp. Leader and Member of the Oceanographic Expedition of the "Willebrord Snellius", which investigated the Eastern part of the East Indian Archipelago in 1929 and 1930. The first has kindly permitted that the bathymetric map of the Archipelago, which for its eastern part is entirely based on, the great number of soundings of this expedition, is published in this report, although the report of the Snellius Expedition regarding these soundings will only appear a few months later. For all details concerning the soundings and the interpretation of the depth-contours, the reader may be referred to Vol II, part 2, of the report of the Snellius Expedition.

To Dr. Kuenen the writer is obliged for his valuable morphological contribution of chapter VIII of this publication. It treats of, the morphology of the archipelago and shows that the interpretation of the gravity anomalies is in harmony with it. For further details we may refer to the more exhaustive study of Dr. Kuenen in Vol V, part 1, of the report of the Snellius Expedition.

This second volume of the report is preceded by a theoretical chapter in which the writer has put together some general considerations and investigations regarding the subject of the interpretation of gravity anomalies. In an introduction to this chapter he has tried to give a summary of this subject for the not-geodesist.

Chapter II may be considered as the continuation of the first volume which has appeared two years ago and which treats of the gravity expeditions themselves and of the computation of the results; it contains the report of the gravity expedition in the Atlantic Ocean which has taken place since then. Its results have been added to the list of chapter III, which gives the results of the Bouguer reduction and of the isostatic reduction according to three different systems of reduction of all the 486 stations. In order not to burden this publication with too many figures the detailed data of these reductions have been published in a separate envelope.

Chapter IV gives a general survey of the results without going into possible interpretations. The conclusions of this chapter will probably be shared by all who study these results. An attempt at an interpretation is taken up in the remaining chapters of which V-VIII refer to the East Indies and chapter IX to the other areas that have been investigated. Chapters V-VIII have also been published separately.
For the acknowledgements to the Minister and other authorities of the Netherlands Navy to whose cooperation this scientific research is entirely due, and to the Commanders, Officers and crews of the submarines on board of which the investigations have been made, the writer refers to the Preface of Volume I of this publication.