A new satellite observatory at Kootwijk 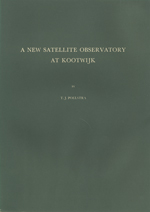 The Working Group for Satellite Geodesy is part of the Sub-Department of Geodesy of the Delft University of Technology (THD) and is represented in the Netherlands Committee for Geophysics and Space Research (GROC) of the Royal Netherlands Academy of Sciences.

It has been assigned the tasks of teaching and investigation in the field of satellite geodesy; since 1966, it has participated in a number of satellite observation projects, such as the U.S. National Geodetic Satellite Program (NGSP), the Western European Satellite Triangulation (WEST), the International Satellite Geodesy Experiment (ISAGEX) and the present European Short Arc Programme. This covers the so-called photographic determination of direction towards satellites. In the meantime the Working Group developed theoretical and practical calculation schemes in order to be able to use the observations made simultaneously with other stations for calculations in geodetic networks. It is intended to continue this work.

The Working Group together with its observation facilities is the only one of its kind in The Netherlands so that practical and significant satellite geodesy is possible only in cooperation with similar and comparable foreign institutes. This cooperation has already been initiated and future plans in this field have been drawn up. This is of particular importance in view of the planned purchase of the highly accurate laser-ranging system for measuring distances between the station and a number of satellite positions. This system constitutes a sophisticated addition to the existing photographic direction-measuring system. In view of the high accuracy aimed at, the use of a second-generation laser ranging system could lead to international cooperation in the multidisciplinar field of geodynamics.

Since the end of 1973, all activities of the Working Group have been carried out in the new observatory at Kootwijk near Apeldoorn; the laser-ranging equipment will be ready for observations by the end of 1975.