Vertical angles, deviations of the vertical and adjustment 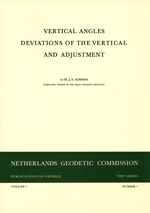 The possibility of using vertical angle measurement as a means for determining deviations of the vertical has been investigated by several geodesists. In his papers [3], [4], [5] and [6], R. Finsterwalder did important pioneering work which was and is continued especially in Germany and Switzerland. F. Kobold gave in [10] a survey of the results that have been reached in this field, whereas W. Hofmann in his comprehensive study [8] investigated the possibilities of determining accurate geoidal heights and deviations of the vertical by vertical angle measurements.

The present author hopes to make a contribution to the discussion and to the solution of some existing problems by examining the subject in the light of the calculus of observations.

One of the main characteristics of the mathematical model used by the authors mentioned is that the coefficient of refraction k is assumed to be constant over a whole net or at least in parts of the net. The use of a coefficient k usually implies the assumption of a circular path of the light-rays, and the assumption of its being constant has far-reaching consequences. Although it seems that in high mountainous areas k is more constant than in lower parts of the atmosphere, there is always a possibility that the accuracy of vertical angle measurements is considerably reduced by fluctuations of refraction.

The interesting article [14] by L. Hradilek deals with the computation of a coefficient of refraction for each line of sight, on the basis of a formula given by A.A. Izotov and L.P. Pellinen. This formula expresses k as a function of atmospheric pressure and temperature (measured at the station), in the temperature gradient (which can be introduced as an unknown) and in the so-called aequivalent height, which is a function of the height of the line of sight over the surface of the earth in the profile between the two stations concerned. In view of the difficulties which are peculiar to the mathematical model using a constant coefficient of refraction, this method seems to be a big step forward. It would have been interesting to connect the results of the present paper to those of [14], but when the author came in the possession of Hradilek's paper, his own work was too far advanced to widen its scope to that extent.

Consequently, this paper is devoted mainly to the properties of the 'classical' model of trigonometric levelling and to the examination of some approximation methods used in practice. The results of computations will, as a rule, not be interpreted physically; this means that no conclusion will be drawn as to, for example, what kind of heights are found by trigonometric levelling.