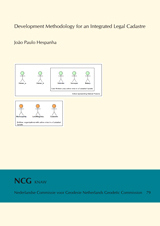 This Thesis describes the research process followed in order to achieve a development methodology applicable to the reform of cadastral systems with a legal basis.
It was motivated by the author’s participation in one of the first surveying and mapping operations for a digital cadastre in Portugal, and the problems faced by the cadastre, and more generally, the Land Administration System in Portugal.
After approaching Delft University of Technology (more specifically OTB Research Institute) with a research proposal mainly applied and restricted to the Portuguese cadastral situation, it was suggested to propose a new Cadastral Data Model, to be derived from the (then called) Core Cadastral Domain Model. This last model has evolved into the current Final Draft International Standard ISO 19152 - Land Administration Domain Model (LADM).
The use of LADM as a fundamental contribution to the research, along with the participation in its development, allowed to expand from an applied and focused research context, to a more generic and widely applicable one. Although the main Case Study is still describing Land Administration in Portugal, the resulting development methodology equally benefited from the study of country models developed elsewhere in the World (Iceland, Queensland (Australia) and Canada (federal land)).
The generic and worldwide nature of the LADM allowed thus to formulate the main aim and research question of this Thesis:

How can a system development methodology support in a efficient and flexible manner the creation of an integrated legal Cadastre, while addressing the interrelations between the technical, legal and organisational aspects?

The remaining paragraphs of the summary will report on how the resultant development methodology was obtained, as well as the actual products from the implementation test on the existent Portuguese Cadastral Model (hereafter referred as PT CDM) leading to the single, most important outcome; the Portuguese country model, LADM PT.
Starting from the more generic concepts applied to the development methodology, the systems approach as applied to Land Registries, which recognizes different aspects under which the system can be examined and described (technical, legal, administrative and institutional), was the underlying concept for this Thesis, resulting from the contribution from (Zevenbergen, 2002).
The technical aspects of an integrated legal cadastre, or more generically, a Land Administration System, were the ones that received greater attention. The software development life cycle methodology called Unified Process (UP) and the Model Driven Architecture (MDA) supplied the more important concepts and procedures to derive a specific country model from the domain model.
Both sets of concepts (UP and MDA) were adapted and merged into the development methodology, taking into consideration the specifics of the different aspects of an integrated legal cadastre.
The design of the different components (translated to UML packages in the country model) has used a number of existing standards and specifications from international organizations as ISO, the Open GIS Consortium (OGC), the World Wide Web Consortium (W3C) and the Object Management Group (OMG). This way, it is heavily standards based.

On the legal aspects, the most important input to the research was the Legal Model as developed by (Paasch, 2005). This provided an object-oriented view reflecting generic legal concepts, as abstracted from a number of Western Europe legal frameworks, and which can be applied (at least) to both countries with Civil Code and with Common Law based legislations.
The administrative aspects were equally considered, namely by the integration of elements belonging to that component in LADM, with specific classes present in the Portuguese Cadastral Model. Additional UP products, which included UML defined elements such as the Use Case Model and related Activity Diagrams reflecting cadastral update procedures, were developed in complement to the country model.
The main institutions related to a legal based cadastre, namely those related with the fundamental institution of Property and the related Real Rights, and those related to the cadastral surveying and mapping component, were studied and reported for the Case Study. Contribution from Social Sciences in the fields of institutional theory were considered, concerning the institution of Property. In particular, the ontology description of Property is compared to the Domain Model description, identifying its similarities and differences.
The following list of items reports on the products developed by the application of the development methodology. It follows the steps to get from the non-compliant, existing Portuguese Cadastral Data Model (PT CDM) to the LADM based country profile LADM PT.

The fundamental contribution and answer to the main research question is thus the development methodology itself, whose products are referred above for the LADM PT country model. But the research path followed to obtain this methodology provided other contributions, which are summarized in the following list.

Finally, the results obtained so far, namely considering the data in the implementation test (a subset of model elements belonging to the derivation of LADM PT from LADM), identified a number of paths open to future research.
The most relevant would be the specification of the dynamics of RRR’s through time in a way that future results are integrated into the methodology. The legal model of other forms of property (legal regimes) besides those already considered for the realm of private property will also benefit a Land Administration System, extending its role from the traditional Land Registry and Cadastre.
In the Information Technology field, the research and development of an enhanced set of open source CASE tools assisting the derivation process, following MDA principles, is highly desirable. In particular, the support for the specification of OCL constraints in all phases of the derivation process should be further improved.
At last, and considering the expected approval of LADM as ISO 19152 in the short term, a documented procedure should be agreed by future contributors to the Domain Model itself, and mainly to the reporting of new country models, for which this Thesis can provide a first input.