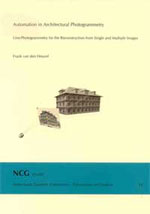 Line-Photogrammetry for the Reconstruction from Single and Multiple Images

The research is presented in the form of a collection of papers published between 1997 and 2002. Furthermore, the methods described in the papers have also been applied to a reference set of images. The results of these experiments are presented in a separate chapter.

The demand for models of the built environment has increased due to the development of computer applications such as virtual and augmented reality, and computer games. In these applications the required accuracy of the models is not as high as in traditional applications of architectural photogrammetry, such as documentation of cultural heritage. Emphasis in research has shifted towards efficient production of computer models that show a high level of realism.

In this study, full automation of reconstruction from images is not aimed at. The reason is that for many years to come it is expected that user-interaction will be required for the reconstruction of well-structured building models. Therefore, a semi-automatic approach is chosen that exploits knowledge of the characteristics of the application. These characteristics can be summarised as regularities in the shape of the object, such as planar fades, rectangular and repeating structures in the form of windows, and shape symmetries. As a result many object edges will be straight and often their projections in the images show good contrast, which facilitates their automated extraction using image processing techniques. The automatically or manually extracted straight image line features are the main observations in the line-photogrammetric approaches presented in this thesis. Furthermore, the methods developed are characterised by the use of robust direct solutions for approximate value computation, followed by least-squares adjustment in which the knowledge of the shape of the building is processed together with the image line observations. This integral adjustment provides optimal estimates for the object model parameters and facilitates quality assessment.

A significant part of the research is on single image processing for object reconstruction and camera calibration. With the use of shape knowledge it is often possible to partially reconstruct a building from line observations in a single image. A method has been developed in which the conditions on the image line observations that result from knowledge on the related edges in object space are adjusted. The adjusted observations are used for reconstruction. This method is of importance because of the possibility to test the consistency of the acquired information during interactive modelling, even before object reconstruction. However, a disadvantage is the separate step for object reconstruction that complicates error propagation. Therefore, a line-photogrammetric bundle adjustment has been developed that allows the integral adjustment of image line observations of a single or multiple images in combination with object shape constraints. The point and plane parameters of a polyhedral boundary representation are the parameters in the mathematical model, while the object constraints that result from the object topology are simultaneously enforced.

It is common in photogrammetry to work with a calibrated camera. However, this is not possible when just one or a few historic images of a building are available, because information on the interior orientation is usually missing. Fortunately, it is often possible to derive important camera information using the conditions on the image lines that result from the object shape knowledge. A method that exploits parallelism and orthogonality of object edges has been developed for the estimation of parameters of interior orientation including lens distortion from one or more images. The least-squares adjustment applied allows for assessment of the precision of the estimates and their correlations. The precision of interior orientation parameters estimated using a single image is low compared to conventional multi-image calibration methods. The quality of the parameters considerably improves when image lines of multiple images are used, while correspondence between the images is not required for this method as is the case in conventional calibration methods.

The second method for relative orientation is a highly automated one. It derives the rotations of the image relative to the object through edge extraction followed by vanishing point detection. Then a search procedure establishes correspondence and the relative position of two images in one step. This method has shown to be successful for highly convergent imagery of buildings and thus is a solution to the wide-baseline stereo problem. However, repeating structures in the building such as identical windows in combination with considerable differences in image scale for corresponding parts of the building may hinder a reliable correspondence detection. A few manually established correspondences may then be required.

Vanishing point detection uses clustering of image lines based on statistical tests of the intersection of three interpretation planes, i.e. the planes through the image lines and the projection centre. This method exploits both parallelism of object edges as well as orthogonality, and automatically labels image lines according to their orientation in object space. The success rate depends on the characteristics of the building and on factors such as the orientation of the image relative to the object. Vanishing point detection results have been used for estimation of interior and relative orientation parameters. With the detection of at least two orthogonal object orientations an ambiguous rotation of the image relative to the building is found. The automated method for relative orientation resolves this ambiguity. This method exploits coplanarity of object features and detects object planes. In fact, a partial and approximate object reconstruction is retrieved as a by-product. Therefore, it is to be regarded as a first step towards automated reconstruction of a structured object model.

Future research in the direction of automated reconstruction has to aim at refining the object model by the detection of multiple object planes and their topologic relations. In such an approach the edges and points of the object model result from the intersection of object planes, while in the manual reconstruction approach the object edges and points result primarily from the intersection of interpretation planes.

The two different methods for image orientation have been applied on four images taken at the corners of the building. The first one is based on the reconstruction of rectangles from a single image. Resulting orientations differ less than 4 degrees from the adjusted values derived in a bundle adjustment. With the second more automated method a correct approximate solution was obtained for all image pairs using two or three manually measured corresponding points. Full automation of relative orientation was not possible for all image pairs due to the repeating structures in the façades and for imagery where image scale differences were large.

An object model was reconstructed based on a line-photogrammetric bundle adjustment of manual line measurements in the same four images. Geometric object constraints made the reconstruction of occluded object points possible, improved regularity of the building model and strengthened the geometry of the network.

The research presented in this thesis contributes to the fields of photogrammetry and computer vision. However, emphasis is on photogrammetry where manual or semi-automatic measurement methods prevail and least-squares adjustment is the tool commonly applied for parameter estimation. The developed line-photogrammetric bundle adjustment model that allows the incorporation of object shape knowledge is the main contribution to this field. Computer vision is generally more focussed on automation, single image processing, and the use of uncalibrated cameras. Therefore, the methods developed for vanishing point detection, used for image orientation and camera calibration, and the methods developed for reconstruction from a single image are primarily in the field of computer vision. In conclusion, this thesis contributes to bringing photogrammetry and computer vision closer together, which will be beneficial to both fields.

In this project, large-scale 2D GIS databases were used as additional information source. Combination of image data and map data turned out to improve the reliability of the reconstruction. Generic knowledge about the shape of the buildings is also incorporated in the system. Since most buildings can be described as an aggregation of simple building types, the knowledge about the problem domain can be represented in a building library containing simple building models. Therefore, a building library was defined containing the most common building primitives, such as flat roof, and different types of gable roofs.

The building reconstruction process was formulated as a multi-level hypothesis generation and verification scheme and it was implemented as a search tree. A method that can localize the buildings in images using map information has been developed. Also, a method for generating building hypotheses corresponding to the primitives defined in the building library has been developed. This implies stereo matching of image features (corners, lines) which correspond to map primitives and fitting of the building hypotheses to images.

A further contribution is the definition of a metric for evaluating the generated building hypotheses in order to select the one which best describes the image. The metric is based on the formulation of the mutual information between the building model and the images. Methods for the estimation of the mutual information from training samples were analyzed. This metric has been rigorously derived from information theory and does not require a priori information about the surface properties of the object and is robust with respect to variations of illumination. Also, no assumption about the shape of the objects are made. As result the method is quite general and may be used in a wide variety of applications.