Knowledge-based interpretation of aerial images for updating of road maps 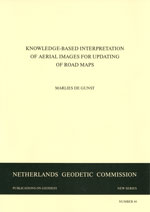 In modem map production a shift took place from analogue maps to maps in digital format, stored in Geographic Information Systems (GIS). Because of the advantages of GIS, this development caused a wider use of topographic data and therefore a larger demand. To be effective, GIS depends on accurate and up-to-date input data. The major part of this data is acquired from aerial photographs and satellite images. However, the photogrammetric processing of the data forms the bottleneck in the geo-information supply. Its present form, outlining manually every object in the photograph, is labour-intensive and time-consuming. Therefore, automation of the acquisition of topographic information from aerial images is highly desirable.

Considering the current state-of-the-art of automation of photogrammetric processing, the conclusion can be drawn that tasks involving interpretation capabilities of human operators are very difficult to solve by computer. A large number of publications deals with the problem of interpretation of aerial images in general and extraction of roads in particular, but results are not suitable for application in practice. An important reason for disappointing results is the complex contents of aerial images. It has been shown that none of the image processing operators are perfect and that we have to select useful image processing operators and combine them into effective image analysis processes. Even though maps are recognized to be a quite valuable knowledge source for interpretation, they are hardly used in previous work.

The science of computer vision is confronted with similar problems when trying to automate interpretation tasks. Knowledge-based concepts have shown to be most promising for these tasks. The design philosophy is to make the involved object properties more clear by organizing a priori knowledge into models or knowledge bases for each object class and to separate this knowledge from general problem-solving computation. This thesis focuses on the potential of knowledge-based concepts for updating road maps by interpretation of aerial images. The aim is to design and evaluate an interpretation strategy based on a knowledge base, which reflects the complex contents of aerial images.

In the designed interpretation strategy bottom-up processing (segmentation, object recognition) is integrated with top-down reasoning (hypothesis generation, inconsistency detection). Outdated or incomplete road maps are utilized to initiate the search for new parts of the road network in up-to-date aerial images. Hypotheses are generated for detection of changes a road network may undergo and for the presence of new roads that appear in the context of the changed parts. Recognized related parts on their turn generate hypotheses for further search based upon spatially related objects. Thus a chain of successive search actions is formed. This process is called contextual reasoning. Each search action activates it s own image processing technique and values for its parameters, especially suitable for change detection or segmentation of a specific type of road.

They operate on a restricted region of interest in the grey-value domain. This strategy is called goal-directed segmentation. By generation of hypotheses, the combination of several image processing techniques is realized. A priori defined properties of the searched type of road in the knowledge base are used for testing hypotheses and result in object recognition. Since errors are inevitable in image analysis, inconsistencies need to be detected and solved. For this purpose constraints in the knowledge base are defined for the presence of objects in relation to the presence of other objects. If the object is not found, alternative hypotheses are generated, resulting in resegmentation.

The contents of the knowledge base plays an important role in the performance of the interpretation strategy. Objects and their relationships are the basic primitives, represented in the knowledge base by frames. Object definitions are used for the task of object recognition in the interpretation strategy. Object relationships are used for hypotheses generation, goal-directed segmentation and inconsistency detection. The question is, which parts of the road network should be defined as objects and which properties should be used to build a road model. The complex contents of aerial images requires recognition of meaningful parts of the road network instead of linear structures. The standards for road construction can be used to define properties of specialized road types.

By means of a case study the concepts are concretized for a certain updating situation and it is tested if our research objectives are met. The case is considered in which the outdated map only contains a motorway and that connected link roads present in aerial photographs are newly constructed. For this case experiments on nine different scanned aerial photographs are done. This imagery originates from the photogrammetric practice of the Survey Department of Rijkswaterstaat. They were divided into a learning and a test set. Experiments on images at a resolution of 0.4 and 1.6 m. are done in order to investigate the influence of resolution. The effect of incorporation of knowledge from the standards for road construction is tested by using two different road models in the knowledge base. One defines general parts of the road network as objects, e.g. road elements and junction, and includes their general properties. The other defines specific objects like 2-,3- or 4-lane carriageways and fly-overs with properties based on the standards for road construction. The knowledge base contains temporal and spatial relationships, which activate segmentation techniques. No special attention is given in the scope of this thesis to development of image processing techniques. The used segmentation techniques are based on evaluation of the grey-value profile perpendicular to the road. The procedure for detection of junctions yields an original contribution. Standards for road construction are also used to set parameters and their values are represented explicitly in the knowledge base.

The results of the case study show, that for rather simple configurations, detection and classification are good for both used road network models, but for more complex configurations or worse road appearance, the specialized model gives better results than the generalized model. The reason is that restriction of the search space and of constraints for recognition realized by incorporation of the standards for road construction reduce both the number of omission and commission errors in detection. Besides, it is very well possible to recognize meaningful objects like main carriageways with various number of lanes and discriminate Y-junction from fly-overs.
Thus, addition of knowledge from the standards and definition of specialized road types contribute to the improvement of the interpretation. Results using images at a resolution of 0.4 m. are worse than at a resolution of 1.6 m. The reason is that object properties and segmentation routines developed at low resolution can only be applied at a limited range of image resolutions' which was exceeded at high resolution.

Main contributions are the way in which outdated or incomplete maps are utilized in the interpretation strategy and the incorporation of standards for road construction in the knowledge base. Although goal-directed segmentation improves results on interpretation, segmentation remains the weakest and most time-consuming part of the interpretation strategy. Special attention should be paid on the development of techniques for goal-directed segmentation. One of the reasons for omission errors is the limited part of the road network covered by the aerial photograph. This problem can be solved by using neighbouring photographs. Inherent to the use of spatial relationships to search new roads is the dependency between successive search actions. Therefore inconsistency detection and alternative hypotheses generation play an important role in the interpretation strategy, but are hard to define. It should be examined which constraints can be defined within models of topographic objects en their relationships.

In conclusion, the designed interpretation strategy and knowledge-based concepts are suitable for extraction of topographic objects, in particular road networks, from aerial images' The concepts are applicable on various resolutions, for example on satellite images, but the knowledge base needs to be tuned carefully for objects at those scales. At this stage of development the concepts are not yet mature enough to be put in practice as a fully automatic process and it is doubtful if this will ever be achieved. At this time we should concentrate on semi-automatic solutions for the photogrammetric practice. The concepts support inclusion of semi-automatic image processing techniques.