Methods for the generalization of geo-databases 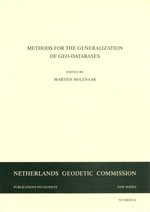 Multi-scale approaches form at present one of the focal points of the GIS research community. This is due to the rising awareness that many processes on the earth surface can only be monitored and managed if they are understood in their geographical context. Part of this context is defined by the scale range at which these processes work. If we consider for instance the development of land use in a district, then we see that this is driven by actors at a lower aggregation level such as farmers, residents and companies. Their activities are constrained however by the socio-economic conditions and the infrastructure at regional level and by the macro economic planning at national and supra national level. An other example is the development of the natural vegetation cover of certain regions. The actual state of such a vegetation cover is defined by the co-occurrence of species that form vegetation types, which are part of eco-systems. Their development will be constrained by climatic conditions, the geologic and soil condition of the region and its hydrology. Here too we find hierarchical levels of organization.

The monitoring and management of such processes requires information at different scale levels. The research problem for the GIS community in this context is:

This second item is strongly related to the long standing research problem of map generalization, that is why it is often seen from that perspective. Researchers in this field become more and more aware of the fact, however, that multi-scale approaches in a GIS environment can be dealt with by data base generalization operations. These allow approaches that are quite different form the procedures applied in map generalization and they are more flexible.

This new research field derives it terminology and many of its concepts from both cartography and the object oriented approaches of computer science. This mixture of the idiom of different disciplines leads often to confusion so that the concepts that are covered by the terminology become fuzzy. This confusion may send researchers in the wrong direction when they want to solve multi-scale problems. The subcommission on GIS of the Netherlands Geodetic Commission organized a workshop on the 7th December 1995 to discuss these problems. Five authors were invited to present papers in which generalization problems were treated from several perspectives:

These papers form the contents of this bundle. We hope that the different approaches they present will help the reader to understand the different concepts that play a role in the generalization of spatial data and that the different strategies that are presented are of use for solving multi-scale problems.