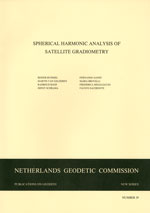 In 1988 the European Space Agency started with a series of studies with the goal to prepare the geodetic user community for a dedicated gravity field mission and stimulate cooperation among various groups. Thereby it was left open whether the planned mission should be based on the principle of satellite-to-satellite tracking, on satellite gradiometry or on a combination of these two methods. In the course of these studies it turned out that the group of the dipartimento di ingegneria idraulica, ambientale e del rilevamento of the politecnico di Milano and that of the faculty of geodetic engineering of the Delft University of Technology worked much along the same line. At various occasions very exciting and stimulating exchange of ideas took place between these two groups. In 1991 it was therefore decided to publish the main line of their development in gradiometry analysis, the so-called timewise and spacewise approach, in a joint report. Compared with the benefit it would have been rather cumbersome to try to homogenize the adopted style of presentation and notation of the two groups. Thus little effort was spent on this aspect. We hope that this does not hamper reading.

The authors like to thank the European Space Agency for its support of the CIGAR-studies and the Netherlands Geodetic Commission for publishing this report.