Refraction of transatmospheric signals in geodesy. Proceedings of the symposium 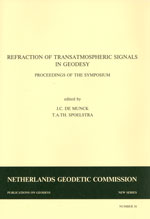 It is with great pleasure that the Netherlands Geodetic Commission presents the proceedings of the "Symposium on Refraction of Transatmospheric Signals in Geodesy".

Already in 1878 when the famous geodesist Heinrich Bruns formulated his grand view of the determination of the figure of the earth, he identified atmospheric refraction as main obstacle in its realisation. Despite of the enormous technological progress, the use of active microwave sensors, the introduction of modern space techniques and a much better understanding of the geometry and physics of the atmosphere, refraction is still a major limitation, although on a much higher level of precision than at Bruns' time. Hence still better atmospheric sensors and models need to be developed. But we also know that what is ones noise is the others signal. In recent years due to the enormous progress in computer modelling and due to an abundance of recorded measurements through the atmosphere it becomes feasible to determine the physical structure of atmosphere by inverse methods.

With this duality in mind T.A.Th. Spoelstra took the initiative to bring together scientists concerned with these subjects and in particular the members of the IAG Special Study Group 4.93 on "wave propagation in refractive media". After consultation with F.K. Brunner and a few others it was decided to organize this symposium. We are glad to notice that a large number of outstanding scientists followed the invitation.

The Netherlands Geodetic Commission thanks Mr. Spoelstra and all members of the organizing committees for the preparations and all advices owing to which we hope and expect the symposium will become a success.

The Netherlands Geodetic Commission is grateful for the support provided by the Department of Geodesy of Delft University of Technology, the International Association of Geodesy, the Nederlandse Vereniging voor Geodesie, the Royal Netherlands Academy of Arts and Sciences (KNAW) and the Survey Department of Rijkswaterstaat.