A Connection between geometric and gravimetric Geodesy. A first sketch 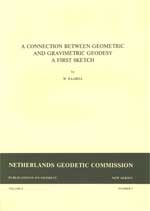 The sketch given here evolved as a spare time activity from the presentation and discussion of the paper IBjerhammer, 1962]. The struggle with the subject concerned the main lines: not all mathematical details have been satisfactorily solved and the theory is not complete, hence the sketchy character of the treatment. The incentive to this investigation came from two sides:

a. In setting up a spatial theory of geometric geodesy the need was felt for a connection with gravimetric {or physical} geodesy that was independent of the classical ellipsoidal approach.

b. Since the lectures by F.A. Vening Meinesz in 1938 and 1939, the field of physical geodesy has always fascinated me and held my interest. However, as the number of publications on this field grew, the theoretical structure became less and less clear to me. Spherical and nonspherical approximations followed each other in arbitrary order, just as the use of Poisson and Green integrals. The use of approximate values was somewhat curious, leading, on the one hand, to a kind of physical interpretation such as the 'telluroid', and on the other hand to a 'fundamental equation of geodesy' which sometimes was a hindrance. Further, the whole theory seems to be due to an 'ill-posed problem', although the application of the collocation technique removes this difficulty or leaves it aside. And, finally, why is the purpose of geodesy the determination of a vague concept like the 'geoid', and not the determination of the topographical land and sea surface of the earth?

In the course of years I have in developing the present approach become more and more convinced that its main lines have a real significance. Many classical results can be recognized in the new theory; its basic thought is connected with the model theory on which I based the adjustment theory of geometric geodesy. Yet many questions and problems are left open: newly developed measuring processes have not found their place yet, methods of dynamical satellite geodesy have not been sufficiently analysed, the elaboration and interpretation of the relationships found are still somewhat problematic. It is hoped that criticism will provide a check on the results obtained.

Let the following summary precede the theory. The core of the theory is the connection of

to the third integral identity of Green. The way in which this connection is established is determined by the analysis of measuring processes, leading to a connection via dimensionless compound difference quantities. Linearization of the integral equations necessitates a closer study of Poisson's integral; it appears that effects of Gauss's integral and Poisson's integral cancel each other in the linearized equations. The closed model of approximate values turns out to be of dominating importance; spherical approximation {Poisson's integral} requires an order of magnitude of difference-quantities that is smaller than is now in use for anomalies. This leads to a stronger interaction with geophysical model hypothesis.
The solution of linearized integral equations leads to Stokes-like integral formulae, the so-called Green integrals, with possibilities for regional applications on land and sea, including some aspects of satellite geodesy.
A guess is made with respect to the background of the inverses of these Stokes-like integral formulae, deduced by Molodenskii.
Concepts like the 'fundamental equation of physical geodesy', 'free air reduction', 'geoid' and 'height' are critically examined. The sketch concludes with some remarks on collocation theory, leading to a consideration of the choice between the use of collocation or of integral formulae in the present theory.