The precision of photogrammetric models 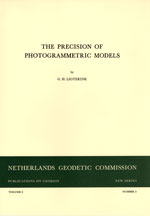 1. Eight experiments have been executed to determine the (σ2). The following observations were repeated 20 times:

The estimated covariance matrix (σ2) is computed from the 20 repeated observations per experiment. This makes 8 full-matrices of 24 X 24 elements for the 8 X 3 coordinates of the 8 model points.

2. The 8 covariance matrices (σ2) were computed from the standard deviations by applying the law of propagation of errors. The observations are divided into three groups:

In order to be able to extrapolate these results further investigations will be necessary for better information about the factors which influence the standard deviations of the individual observations.

The structure of the covariance matrix of the coordinates of model points is essential for studies of precision and accuracy in all procedures which use the photogrammetric model as basic unit.