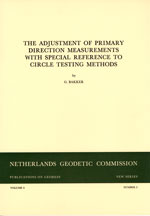 The methods for testing circles applied up to now can be arranged in two groups. The first group consists of the methods which have the object to determine the deviations in a limited number of specified graduation lines, evenly spaced on the circle. Originally these methods were applied to circles before they were mounted, but recently modifications of the observational programmes have also been used to test circles already built-in. In the programme developed by Bruns a specified number of standard angles is measured. The magnitude of these angles is taken equal to a multiple of the interval between the graduation lines to be investigated. The design of the programme is such, that equal precision is obtained in the deviations of all these graduation lines.

The above testing methods are possibly useful when the theodolite is used for technical projects where often angles of a specified magnitude must be set out. They loose, however, much of their efficiency if the quality of the graduation as a whole must be reviewed. The methods developed for that purpose, and to which the name of Heuvelink is closely connected, are classed under the second group. The methods of this second group are based on the assumption that the actual deviation in the graduation lines can be considered as a combination of a regular periodic- and a random component.

The determination of this regular part by means of a Fourier series is an essential part of them. The original observational programme after Heuvelink is more than once supplemented or completely replaced by other programmes and the statistical interpretation of the results has also changed in the course of years.

Wiersma suggested the use of two standard angles and advised to realize these two angles by three collimators and to combine the observations of the three directions into one set instead of observing independently the three possible angles. Wiersma, like most authors on this subject, applied the Fourier series in its asymmetrical form, i.e. with phase angles. The introduction of these phase angles leads however to non-linear model relations. The mathematical and statistical elaboration then looses its elegance and becomes quite complex. That was the main reason that little attention was paid to Wiersma's suggestions until Roelofs published his 'bundle of rays' method. This method, where four directions are combined into one set, has successfully been applied. According to Husti the results are very promising.

After this fundamental new approach by Roelofs, it seemed attractive to extend the number of four standard directions to an arbitrary number of m standard directions and to compare the Schreiber and Bessel method of direction measurement. In the Schreiber method all possible combinations of two directions, which cannot be supplemented to a full round, are observed independently whereas in the Bessel method all directions ale observed in one set. By posing the problem of circle testing in this way it can easily be seen that in fact there are no essential differences between the design and the elaboration of a testing programme and a normal field programme. The difference only appears in the objective of these programmes. In the former case one is interested in the parameters which describe the deviations in the circle graduation whereas the mean directions are of no importance, in the latter case it is just the other way round as least square estimations of the directions are the only thing wanted.

The computational elaboration in a model that includes the parameters representing the regular deviation in the circle graduation, is rather unwieldy and can hardly be executed on a desk calculating-machine. That is the main reason why up to now the field measurements have always been adjusted on a simplified model that does not take into account the regular deviation of the graduation. Another reason is that least square estimates of the directions are the same for both models so there is no need to bother about the determination of the parameters representing this regular deviation. A less favourable implication, however, of the use of such a simplified model is that the estimate of the variance factor, being the variance of the observational variate with unit weight, looses its value as a measure of precision. In the case large values for the variance factor are found, the observer might be tempted to pass an unfavourable judgement on the theodolite, whereas it is possible that such large values are caused by the occurrence of a large regular deviation of the graduated circle that had been left out of consideration. This implication and the analogy between normal field programmes and special circle testing programmes have led to the development of ALGOL programmes for the Bessel and Schreiber method in such a way that these programmes can be used for both purposes.

The use of a general procedure developed at the Computing Centre of the Geodetic Institute of the Delft University of Technology for the elaboration of the 2nd standard problem of the adjustment theory (the method of observation equations), was considered first. On closer examination, however, it appeared that the non-diagonal elements of the inverse matrix of coefficients of the normal equations (gαβ) - the algorithm and notation as given by Baarda are used throughout this publication - are zero whereas simple analytic expressions could be derived for the diagonal elements.

As also for the vector of reciprocal unknown variates (γβ) simple analytic expressions could be found, it was obvious to write a special ALGOL programme based on these properties. The simple form of the matrices (gαβ) and (γβ) is due to the orthogonality relations that exist between the trigonometric functions. The derivation of some of these relations is given in section 1.

In the sections 2 and 3 the adjustment of the Bessel and Schreiber programmes is dealt with in extenso. The results can be summarized as follows. Let m directions r[i] be observed in n circle positions. Let r be the circle reading, 2π/p the period of the trigonometric functions and a[1, p] and a[2, p] the amplitudes arranged in two one-dimensional arrays.