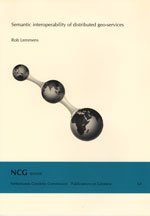 The last two decades have shown a major shift from stand-alone software systems to networked ones. As with all information system domains, Geographic Information Systems (GISs) have been influenced to a large extent by recent internet developments, resulting in an increasing availability of client/server applications using distributed geo-(web-)services, such as interactive maps, route planners and gazetteers. There is an increasing need for organisations to perform on demand geo-processing tasks by integrating and reusing geo-information and geo-services from within and outside the organisation. These activities are typically performed in the context of so called Geo-information Infrastructures (GIIs).

The process of integrating services is commonly referred to as service chaining. This requires that services can be easily found, and that they are executable and interoperable. Interoperability means that the services ‘understand’ each other’s messages. A major impediment is formed by the semantic heterogeneity (the differences in meaning) of geo-information and of the functionality of geo-services. Making services semantically interoperable is an important prerequisite for information sharing in today’s networked society. This involves services that rely on different knowledge domains, one of which is the geo-information domain.

Within this context, the research presented in this thesis provides solutions for the computer-aided integration of distributed heterogeneous geo-information and geo-services, based on their semantics (the meaning of their content).

Geo-information distinguishes from other information by its spatial relevance. Geo-services often have to deal integrally with multiple-representations of features in a spatial, temporal and thematic dimension. Geo-services are also implicitly connected by the geographic location of the features they process. This has implications for the interoperability of geo-services. For example, the validity of a service (e.g., a routeplanner) may be bound to a specific geographic area, which could imply it cannot be used in combination with services involving another validity area. On the contrary, services that seem to be incompatible due to differences in feature representation (e.g., geometry, coordinate reference system), may turn out to be useful in combination, because they contain information on the same locations.

On demand geo-processing requires services and the meta-information that describes the services to be available at the time a task is being executed. Moreover, the service descriptions should be based on commonly agreed rules for service characterisation. Inter-service contracts that contain such rules may result in service interoperability and this can be achieved at three levels: syntax, structure and semantics. The influential specifications of the Open Geospatial Consortium (OGC) and the ISO 19100 series of standards, implement formal contracts on the syntactical and structural level, but they prescribe only informal contracting at the semantic level. Despite their rigid conceptualisation, they lack a machine-accessible formalisation that supports the specification of semantics for geo-information and geo-services. This research has developed such a formalisation, which is specified in a so called semantic interoperability framework. In this framework a key role is played by machine ontologies, which are machine-accessible representations of knowledge that are used for inferring intra- and inter-resource relationships. Recent research efforts in the field of the SemanticWeb have contributed considerably to the deployment of ontology-based applications by providing a theoretical foundation (Description Logics), ontology languages (e.g., the Web Ontology Language (OWL)), and tools for ontology creation, access and reasoning with web-based (machine) ontologies. The power of web-based ontologies lies in their interoperable (XML based) representation, the use of unique namespaces and the fact that they allow for automated reasoning.

The semantic interoperability framework developed in this research, contains (1) geo-information modelling ontologies which are based on the ISO General Feature Model, (2) domain specific ontologies (amongst others, one which is based on a data model used by the Dutch Topographic Service), and (3) a geo-operation modeling ontology. The latter is based on a geo-operation taxonomy, an input/output parameter characterisation and a workflow model. The taxonomy and parameter characterisation have been developed as part of this research, the workflow model is based on OWL-S, an OWL-based upper ontology for web services.

Ontology-based service descriptions have been created in the context of four use cases in the following areas: (1) information model integration for risk mapping, (2) ad hoc data integration in a disaster emergency situation, (3) reuse of geodata and geo-services in scientific research, and (4) ad hoc integration of travel services. The ontology-based descriptions are used as representations of service requests and advertisements in a matchmaking process. The matchmaking is performed by an ontology reasoner which can infer implicit relationships that exist in a knowledge base containing service descriptions as sets of concepts. The reasoner is implemented together with the ontologies in a prototype environment. Except for the reasoner, this has been carried out with open source software. Within this environment, basic matchmaking has been successfully performed to support data set integration and service chaining. This has been demonstrated by tests implementing the aforementioned use cases.

The offered solution is flexible and extensible. With respect to flexibility, the research demonstrates the use of incomplete service descriptions. With respect to extensibility, the research shows how service descriptions can be extended with new concepts. It is also demonstrated how existing application domains can be linked through ontology mappings. In the process of service chaining, four steps have been identified, i.e., discovery, abstract composition, concrete composition and execution. The link between the abstract and concrete composition of services is realised by annotation, which connects ontology elements with parameters of executable code. For one of the use cases, this code has been deployed in a prototype software application (the latter being part of an external research effort).

There are also limitations to the approach followed, which are partly due to the limitations of OWL and reasoning with it, i.e., with respect to spatial reasoning and the use of metaclasses. In addition, the current prototype environment has several shortcomings: (1) constraints of the user-interfaces (entering service descriptions in Description Logics is still rather complex), (2) the inflexibility of the reasoning implementation and (3) the incompleteness of mappings between domain ontologies, all of which are thought to be surmountable.

A number of recommendations are made for the improvement of the current design and implementation of the interoperability framework, such as the incorporation of: meta-information propagation, concept similarity quantifiers and result ranking in the matchmaking process. The deployment of the approach requires key organisations such as OGC to develop and maintain domain independent parts of a semantic interoperability framework and organisations with a GII mandate to manage its domain dependent parts.