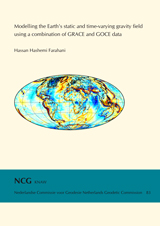 GRACE/GOCE global static gravity field modelling: DGM-1S A new global static gravity field model entitled DGM-1S (Delft Gravity Model, release 1, Satellite-only) is computed by a statistically optimal combination of GRACE and GOCE data. The model is based on seven years of GRACE KBR data, four years of GRACE satellites' kinematic orbits, 14 months of GOCE kinematic orbits, and 10 months of GOCE Satellite Gravity Gradiometry (SGG) data. Kinematic orbit and KBR data are processed with a variant of the acceleration approach, in which these data are respectively transformed into "three-dimensional (3-D) average acceleration vectors" and "range combinations" (≈ inter-satellite accelerations) with a three-point differentiation. Gravity gradients are processed in the instrument frame. Stochastic models of data noise are built with an auto-regressive moving-average (ARMA) process. The usage of ARMA models ensures that (i) coloured noise in data is appropriately dealt with; and (ii) data are combined in a statistically optimal manner. DGM-1S is compiled up to spherical harmonic degree 250 with a Kaula regularization applied above degree 179. It is found that (a) the usage of GOCE kinematic orbits may not lead to an improvement of a static gravity field model if GRACE data and GOCE gravity gradients are already incorporated; and (b) GOCE gravity gradients manifest their contribution in a combined GRACE/GOCE model above degree 150. For the purpose of an assessment, the DGM-1S, GOCO01S, EIGEN-6S (only its static part), and GOCO02S geoid models are used to compute the corresponding oceanic mean dynamic topography models by subtracting the DNSC08 mean sea surface model. The results are confronted with the state-of-the-art CNES-CLS09 mean dynamic topography model, which shows the best agreement for DGM-1S. Furthermore, the test suggests that the GRACE/GOCE satellite-only models are addition, the test indicates that problems still seem to exist in satellite-only GRACE/GOCE models over the Pacific ocean, where considerable deviations of these models from EGM2008 are detected.

Validating global static gravity field models: quantifying GOCE mission's added value and inspecting data combination optimality in models produced with surface data The ability of satellite gravimetry data to validate global static gravity field models is studied. Two types of control data are considered: GRACE KBR data and GOCE gravity gradients. The validation is based on an analysis of misfits computed as differences between data observed and those computed with a force model that includes, in particular, a static gravity field model to be assessed. Only "independent" data are used in the model validation, i.e., those that were not used in the production of models under assessment. The methodology is applied to eight models: EGM2008 (truncated at degree 250), EIGEN-6C (only its static part and truncated at degree 250), two GRACE-only models (ITGGrace03 and ITG-Grace2010s), and four GRACE/GOCE models: GOCO01S, EIGEN-6S (only its static part), GOCO02S, and DGM-1S. The validation shows that independent data of both types allow a difference in performance of the models to be observed, despite the fact that the duration of these data is much shorter than that of data used to produce those models. The KBR and SGG control data demonstrate relatively high inaccuracies of EGM2008 in 5 – 22 mHz (27 – 120 cycles-per-revolution, cpr) and 10 – 28 mHz (54 – 150 cpr) frequency ranges, respectively. The latter data also reveal inaccuracies of ITG-Grace2010s in 25 – 37 mHz (135 – 200 cpr) frequency range. The validation in the spatial domain shows that EGM2008 performs weaker than the GRACE/GOCE models. Considering root mean square (RMS) misfits related to the zz gravity gradient component (with z being the nadir axis of the instrument frame), the performance difference in the continental areas poorly covered by terrestrial gravimetry data (Himalayas, South America, and Equatorial Africa) is 76 – 83 %. This difference is explained mostly by a loss of information content of ITG-Grace03 when it was combined with terrestrial gravimetry/satellite altimetry data to produce EGM2008. Furthermore, the revealed performance differences are 4 – 16 % in the continental areas well covered by those data (Australia, North Eurasia, and North America) and 11 % in the world's oceans. These differences are related to the GOCE mission's added value to the static gravity field retrieval. It is shown that EIGEN-6C also suffers from a loss of information during data combination, but in a much less pronounced manner. In South America, for instance, this model is found to perform poorer than its satellite-only counterpart, i.e., EIGEN-6S, by only 12 %. The GRACE/GOCE models show in the poorly surveyed continental areas a higher accuracy than ITG-Grace2010s: by 23 – 36 %, which is attributed to the GOCE mission's added value. The quantified added value is shown to be almost entirely related to the coefficients below degree 200. DGM-1S and GOCO02S show an almost similar performance against GOCE control gravity gradients. Nevertheless, the former model shows a slightly better agreement with KBR control data. Both models agree with control data of both types better than EIGEN-6S.

Assessing GOCE mission's added value to time-varying gravity field modelling Temporal gravity field variations recovered from KBR data suffer, among others, from a limited spatial resolution and a relatively low accuracy of the East-West changes. I investigate whether a retrieval of these variations can be improved by incorporating GOCE data. To that end, I compare monthly solutions up to degree 120 computed (i) from KBR data alone and (ii) using a statistically optimal combination of KBR data with GOCE kinematic orbit and gravity gradients. The impact of GOCE data is analysed in the context of unconstrained solutions and after an optimal anisotropic filtering. This impact in these two cases is found to be radically different. In the case of unconstrained solutions, a usage of GOCE data allows the noise in these solutions to be reduced by 1 – 2 orders of magnitude. I demonstrate, however, that this reduction is a stabilization effect and is not driven by the information content in GOCE data. In the case of the filtered solutions, the impact stays, in average, at sub-millimeter level in terms of equivalent water heights. This is below the GRACE noise level. The peak impacts reach about 1 cm. This holds true for the combined impact of GOCE kinematic orbit data and gravity gradients as well as for the impact of these data types individually. Relatively, the peak impacts do not exceed 5 – 7 % of the signal amplitude, because they always occur at locations where the time-varying gravity field signal is strong. Nevertheless, I refrain from concluding that added value of GOCE data to the retrieval of temporal gravity changes is always negligible. A number of scenarios are discussed, in which the impact of GOCE data may exceed the level quantified in the study presented.

GRACE global time-varying gravity field modelling: DMT-2 The Delft Mass Transport model, release 2 (DMT-2), similar to its predecessor, i.e., DMT-1, is produced from KBR data. The model consists of a time series of 94 monthly solutions (February 2003 – December 2010). Each solution consists of spherical harmonic coefficients up to degree 120 with respect to DGM-1S. Both unconstrained and optimally filtered solutions are produced. The improvements applied in the production of this new model as compared to its predecessor are usage of: (i) an improved estimation and elimination of the low-frequency noise in residual range combinations, so that strong mass transport signals are not damped; (ii) an improved frequency-dependent data weighting, which allows statistically optimal solutions to be compiled; (iii) release 2 of GRACE level-1B data; (iv) a recent a priori static gravity field model, i.e., DGM-1S; (v) release 5 of the AOD1B model of non-tidal mass re-distribution in the atmosphere and ocean; (vi) the recent ocean tide model EOT11a; and (vii) an improved calibration scheme of the satellites' accelerometers. It is shown that DMT-2 substantially outperforms its predecessor in terms of spatial resolution, which is proven to be mainly associated with the usage of a more advanced frequency-dependent data weighting. Furthermore, it is confirmed that the usage of release 2 of GRACE level-1B data leads to an elimination of the East-West artifacts. Finally, it is shown that choosing the maximum spherical harmonic degree lower than 120 in the context of monthly gravity field modelling could lead to an underestimation of the signal amplitude and the presence of the so-called "Gibbs" phenomenon in the vicinity of areas with strong mass variations. However, the higher spatial resolution of models produced up to degree 120 is almost entirely attributed to the optimal filtering and is not driven by the information content in unconstrained spherical harmonic coefficients.