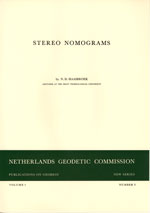 When one has occupied oneself intensively with the construction of nomograms, the wish arises to extend the arsenal of nomographic methods and to look for possibilities for the construction of spatial nomograms. In such a nomogram, that must be a representation of the relation F(abcd) = 0, the four values of the variables which belong together must lie in a flat plane.

In [3] I discussed this possibility already and, for instance, Soreau too gives the principle of spatial nomograms in [4], though very summarily and without going into the problem of the realization. As far as I know Lacmann [1] was the first who occupied himself more fundamentally with the problem, whilst, in a very readable paper [2], Sutor tried to propagate these nomograms. As it is impossible to give a spatial model to a great number of users, he projected this model from two centres of projection on a flat plane in the complementary colours red and blue. When this image, a stereo nomogram, is viewed through red-blue spectacles, the left eye, armed with the red glass, sees only the right (blue) image. The right eye with the blue glass sees only the left (red) image. The two images together give a spatial representation of the model from which one has started or, dependent on the place from which the drawing on the flat plane is viewed, a collinear transformation of this model. By this transformation a flat plane remains a flat plane. In the spatial model, artificially produced by the applied anaglyphic method, the four variables belonging together will remain in a flat plane, independent of the place in the space of the two eye-centres.

Already about ten years ago I designed some stereo nomograms according to the directives given above and I tried to make reliable readings in these nomograms with a similar real reading plane as Sutor describes on page 169 of his paper.

Not only for me, but for all the persons co-operating at that time in the tests, these readings led to unsatisfactory results because it must be deemed impossible to bring the real reading plane through the scale points of the three independent variables and to read at the same time and with the same attitude of the head [2, page 171] the place where the scale of the dependent variable intersects the reading plane.

I stopped then my experiments and I resumed them not before I found a more satisfactory method for the reading of the dependent variable.

As will appear presently from some examples, this method makes no use of a real reading plane but of two pairs of red and blue reading lines on thin, transparent material. They are laid on the stereo nomogram in such a way that, seen through the red and blue reading spectacles, they give a spatial image of the two intersecting diagonals of the quadrangle formed by the scale points of the four variables which belong together.