The geometry of geodetic inverse linear mapping and non-linear adjustment 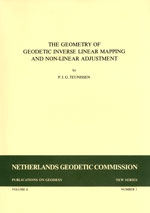 After the introduction, which contains a motivation of our emphasis on geometric thinking, we commence in chapter II with the theory of inverse linear mapping. Amongst other things we show that every inverse B of a given linear map A can be uniquely characterized through the choice of three linear subspaces, denoted by S, C and ν.

Chapter III elaborates on the consequences of the inverse linear mapping problem for planar, ellipsoidal and three dimensional geodetic networks. For various situations we construct sets of base vectors for the nullspace Nu(A) of the designmap. The chapter is concluded with a discussion on the problem of connecting geodetic networks. We discuss, under fairly general assumptions concerning the admitted degrees of freedom of the networks involved, three alternative methods of connection.

Chapter IV treats the problem of non-linear adjustment. After a general problem statement and a brief introduction into Riemannian geometry, we discuss the local convergence behaviour of Gauss' iteration method (GM). A differential geometric approach is used throughout.
For both one dimensional and higher dimensional curved manifolds we show that the local behaviour of GM is asymptotically linear. Important conclusions are further that the local convergence behaviour of GM, 1. is predominantly determined by the least-squares residual vector and the corresponding extrinsic curvature of the manifold, 2. is invariant against reparametrizations in case of asymptotic linear convergence, 3. is asymptotically quadratic in case either the least-squares residual vector or the normal field B vanishes, 4. is determined by the Christoffel symbols of the second kind in case of asymptotic quadratic convergence and 5. will practically not be affected by line search strategies i f both the least-squares residual vector and extrinsic curvature are small enough.

Next we discuss some conditions which assure global convergence of GM.
Thereupon we show that for a particular class of manifolds, namely ruled surfaces, important simplifications of the non-linear least-squares adjustment problem can be obtained through dimensional reduction. Application of this idea made it possible to obtain an inversion-free solution of a non-linear variant of the classical two dimensional Helmert transformation. This non-linear variant has been called the Symmetric Helmert transformation. We also give an inversion-free solution of the two dimensional Symmetric Helmert transformation when a non-trivial rotational invariant covariance structure is pre-supposed. After this we generalize our results to three dimensions.

In the remaining sections of chapter IV we give some suggestions as to how to estimate the extrinsic curvatures in practice; we estimate the curvature of some simple 2-dimensional geodetic networks and we briefly discuss some of the consequences of non-linearity for the statistical treatment of an adjustment. Hereby it is also shown that the bias of the least-squares residual vector is determined by the mean curvature of the manifold and that the bias of the least-squares parameter estimator is determined by the trace of the Christoffelsymbols of the second kind.
The chapter is concluded with a brief discussion of some problems which are still open for future research.