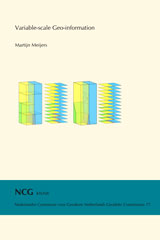 In the series 'Publications on Geodesy' has been published 'Variable-scale Geo-information' by Martijn Meijers. The digital publication can be downloaded as pdf-file (free of charge).
(14-12-2011)

Two new members of the Board of the NCG >>

During her meeting on November 2011 the Netherlands Geodetic Commission has appointed Prof.Dr.Ir. Arnold Bregt (Wageningen University) and Prof.Dr.Ir. Ramon Hanssen (TU Delft) as members of the Board of the NCG.
(29-11-2011)

FIG, EuroSDR and TU Delft are organizing on 16-18 November 2011 the '2nd International Workshop on 3D Cadastres'. The workshop will be held in the Aula Congress Centre, TU Delft, the Netherlands . The NCG is sponsoring the workshop.
Further information >>
(21-4-2011)

Workshop on international Geo-standards. A variety of Dutch and international speakers and a “meet and greet” with experts. Online geo wiki sessions. Topics include: National geographic information, observations and measurements; ESDIN – Test framework for Inspire services and data; 3D pilot and the use of City GML and Land Administration Domain Model.
The Workshop is open to all the experts and delegates attending these meeting. However, the organizing committee also invites all other interested, who may not be familiar to geo-standards, but do have affinity with geographic information.
Further information >>
(18-4-2011)