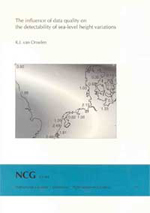 For low-lying areas like the Netherlands, an ever-increasing sea level can become a serious threat. This is especially true if sea level rise accelerates, e.g., due to greenhouse-gas induced warming. To anticipate potential troubles, it is important to have a good estimate of the expected behaviour of future sea levels. This requires an accurate description of the present-day sea level variation curve and of foreseeable changes in this 'natural' pattern in the near future. These changes in the behaviour of future sea levels can be based, e.g., on models predicting global change, but this is beyond the scope of this thesis.

Much simplified, sea level rise over the last century could be described by a linear regression line. Accelerations of this 'natural' pattern have occurred if the slope value of the regression line increases, or higher order regression coefficients are required to describe the sea-level rise curve. The better the natural sea level variation curve (as has occurred over the last century) can be determined, the easier it will be to detect a significant divergence from this curve. The objective of this thesis is to determine how well patterns in sea level height variations can be detected, given the limited quality of the data available.
The objective of this thesis requires long sea level height time series. Therefore, only tide gauge data has been used and altimetry sea level height series have not been considered. Tide gauges measure sea level heights relative to the tide gauge bench marks. Consequently, the resulting sea level height time series show both variations in absolute sea level and vertical movements of the tide gauge bench marks. By monitoring the height changes between the tide gauge bench marks and a stable reference height, these relative sea level heights can (in principle) be converted into absolute sea level changes. Unfortunately, locating a reference point which is truly stable over long time spans will be extremely difficult, if not impossible.

How well a specific sea level variation pattern can be detected depends on the sea level variations themselves, the quality of the tide gauge measurements and, if applicable, the quality of geodetic measurements used to connect the tide gauge bench marks in height. Based on existing literature, it has been tried to gain a clear understanding of these various aspects. Unfortunately, in the literature studied on processes which can influence relative sea-level heights, (almost) no mention is made of long-periodic processes (periods over 20 years), while analysis of tide gauge records shows that long-periodic fluctuations with significant amplitudes do occur in sea level height time series.

Sea level heights as used in this thesis are annual mean sea levels. The quality of these annual mean values not only depends on the quality of the tide gauge measurements, but also on the frequency of these measurements. Not only the quality of state-of-the-art techniques is important, but also of tide gauges and measuring frequencies which were used in the past. Since estimating long-term sea level variation curves requires long sea level height series, historical measurements have to be used as well. In chapter 3, an overview is given of the measuring precision and systematic errors and limitations characteristic for the six tide gauge systems commonly used during the last century. Based on information available for Dutch tide gauges, an estimate is given of how much the quality of annual mean sea levels deteriorates if mean values are based on, e.g., mean tide levels instead of on hourly measurements.

As long as tide gauges experience only secular height movements relative to one another, the common oscillation pattern can still be discerned using techniques like SVD. However, the slope of the estimated common variation curve is determined by the rate of vertical movements of the individual tide gauges. If tide gauges undergo vertical movements which vary in rate and over time, the common oscillation pattern will be affected as well. By relating all sea level height series to the same reference frame (e.g., NAP) internal differences in relative sea level due to vertical movements of the tide gauge bench marks are removed from the data sets. Ideally, permanent monitoring of the tide gauge bench marks is applied. Nowadays, this can be achieved by means of GPS. However, in the past height differences were usually based on spirit levelling.

In chapter 6, the quality of three geodetic techniques, i.e., GPS, gravimetry, and spirit levelling is described. In addition, limitations of these techniques when applied to monitoring height changes of tide gauge bench marks are discussed. Since changes in local gravity represent both variations in mass and changes in station height, gravimetry is not well suited for determining height differences. Uncertainties in height differences obtained by GPS can be reduced to within 1 cm. However, the quality of these measurements might be less in harbour areas (e.g., due to signal interference). GPS has the advantage that it allows for permanent monitoring over large distances, but measurements are only available for the last few decades. Spirit levelling can produce high precision height differences (over short distances), but is time consuming and prone to systematic errors (especially over long distances). However, levelled height differences are often the only type of height information available.

In the past, tide gauge bench marks have (hopefully) been connected to a local reference frame. Between some neighbouring local height datums, height differences have occasionally been obtained as well. However, only since the second European levelling network (UELN-73), the height difference between the continent of Europe and Scandinavia and Great Britain respectively is available. These height connections consist of only a single connection line and, consequently, errors in these height differences cannot be detected by testing. In chapter 8, an indirect method is introduced for connecting vertical datums, which results in dynamic height differences between the fundamental stations in the various height datum zones. An advantage of this method is that quality information (both precision and reliability) of the estimated height differences can de determined as well. Unfortunately, a high quality potential coefficient model is required. As a result, only if a new model (to be obtained from the planned goce mission) becomes available, height differences between datum zones could be derived with standard deviations of 1 cm.
The quality of sea level variation curves depends on the method used to estimate these curves. A number of data analysing techniques have been tested for their suitability for working with sea level height data. Sea level height time series have a number of specific characteristics, for instance non-stationarity, data quality which is not constant for the complete time series, and a wide range of periodic fluctuations with sometimes variable frequencies and amplitudes. As a result, most of the techniques examined do not work well when applied to sea level height data. It is found that the best techniques for smoothing sea level height series are moving average smoothing and Singular Spectrum Analysis, while estimates of future sea level heights should be based on either AR(I)MA modelling or regression.

To determine how well specific sea level variation patterns can be detected, experiments with a large variety of simulated sea level height time series have been performed. These simulated time series consist of the curve which needs to be detected (e.g., a linear trend), periodic fluctuations (based on actual tide gauge data) and simulated additional errors. This can either be inaccuracies introduced by the tide gauge equipment or the height measurements, or (uncorrected for) height variations between tide gauge bench marks. By applying regression to the simulated time series, it is examined whether or not the original sea level variation curve can be recovered. It should be noted that statistical significance of estimated regression coefficients is no guarantee that the 'true' sea level variation curve is detected. For example, if linear regression is applied to a sea level series following a quadratic curve, the estimated trend value can still be statistically significant. For this reason, often trend estimates are shown as a function of an increasing number of observations. For the above mentioned example, estimated trend values will steadily increase with an increasing number of included observations. Only if the model (of a linear regression line) fits the data, and if enough observations are available, estimated trend values will stabilise around the trend value actually present in the data set.

First, experiments have been performed with sea level height data for a single tide gauge. In this case, the original data relative to the tide gauge bench mark can be used. If (based on external knowledge of the behaviour of the local sea level) long-periodic fluctuations could be eliminated from the data set, the detectability of a single linear regression line depends on the trend value and the noise level of the measurements. For sea level data with a trend of 1.5 mm/yr, even if a noise level of 5 cm applies, this trend can be detected if 35 observations are available. If a simulated time series contains long-periodic fluctuations based on data for tide gauge Den Helder, of the order of 90 years of observations are required before trend estimates stabilise around the actual trend value on which the data set is based. Therefore, it is concluded that long-periodic fluctuations are the main factor in determining the amount of data required to detect a linear trend in a sea level height time series.

Finally, for the North Sea area, the quality of spatial variation patterns which can be derived based on trend values for 18 tide gauges, is examined. A spatial pattern in sea level height variations should be based on real differences in trend values for the various locations and not on variations resulting from measuring errors and height changes between tide gauge bench marks. Based on experiments with simulated time series, the following conclusions have been made. If height connections to a local reference frame are performed every 10 years, ranges of errors in trend estimates (as a function of latitude and longitude) are three times as large as results based on annual connection of heights. As a result of, e.g., post-glacial rebound, fundamental stations in the different datum zones can experience height changes relative to one another. If the individual time series (connected to the local datums) are not corrected for these relative vertical movements, this will result in large errors in the estimated spatial variation pattern. If height differences between vertical datum zones are based on results derived for European levelling networks, resulting errors in trend values (as a function of latitude and longitude) will be much larger than those caused by the post-glacial rebound movements (of the selected fundamental stations: Amsterdam, Newlyn, and Helsingborg) itself. This same holds for differences in vertical movements obtained by GPS measurements with a standard deviation of the order of 1 mm/yr.