The Centenary of the Netherlands Geodetic Commission 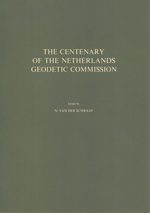 Last year the Netherlands Geodetic Commission decided to mark its hundredth anniversary, 20th February, 1979, with some kind of celebration. In the hundred years of its existence the Commission has not sought much publicity for its work. It is true that the publications and annual reports of the Commission, issued at home and abroad, put its work on record, but the vital role of the Commission in advancing geodesy in The Netherlands and encouraging international cooperation in geodesy was, and still is, too little known by many geodesists. Consequently, the centenary of the Commission provided a welcome opportunity to make its work better known.

The celebration itself had a dual character, firstly, a one-day symposium and secondly, the publication of a memorial volume. The themes chosen for the symposium, held 15th March 1979 were, geodesy in its relation to geophysics, astronomy and satellite geodesy, and the mathematical developments associated with these topics. Besides the addresses and lectures delivered during the symposium, the memorial volume contains a detailed account of the work carried out by the Commission, or under its auspices, during the last hundred years. In addition, the volume contains articles in which personal and ex-officio members give their views on certain scientific aspects of geodesy and its application by the various government geodetic services. Related scientific fields are also discussed.

I would like to take this opportunity to thank all those who contributed to the success of the symposium or submitted articles for the memorial volume. In particular, mention should be made of the assistant-secretary of the Commission, Mr. N. Van Der Schraaf who, in a comprehensive article, has recorded the history of the Commission and, as editor of the memorial volume, spared neither time nor pains to present this publication in its present form. The valuable help of Mr. J. Carr (Langport, Somerset, U.K.) in revising the
English idiom is gratefully acknowledged.

Finally, many thanks are due to the firm W. D. Meinema for the fine craftsmanship they showed in printing the memorial volume.