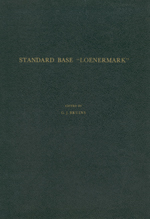 Report on the results of the measurements performed by T.J. Kukkamäki and T. Honkasalo of the Finnish Geodetic Institute

In 1913 the primary triangulation network of the Netherlands was augmented with a base line. This base line was measured near Stroe and the results of the measurements were published by Prof. Ir. Hk.J. Heuvelink in 1931.*)

The object of this base line measurement was to check the unit of length derived in 1900 from the German base line near Bonn. When the length of the latter proved to be in good agreement with the results of the measurements at Stroe (with an accuracy of 1:2.5 x 106) the primary triangulation of the Netherlands - including the unit of length determination - was considered to be completed.

Apart from the base line measurement at Stroe the only work done in the field of primary length measurements in those years was an occasional comparison in length between the invarwires No. 89, 90 and 91 of the Netherlands Geodetic Commission and the wires No. 285, 286 and 287 belonging to the Topographic Service of the former Netherlands East Indies during the period 1915 - 1922. This occurred when the latter were sent via Delft to the Bureau International des Poids et Mesures for calibration.

It was not until 1957 that primary length measurements in the Netherlands drew attention again. In that year in the Loenermark (near the town of Apeldoorn) a standard base with a length of about 576 m and an accuracy of about 1:107 was measured by the Finnish geodesists Prof. Dr. T.J. Kukkamäki and Prof. Dr. T. Honkasalo using the interference method of Väisälä. The results of this measurements are laid down in the following chapters:

Chapter 1, by the editor, contains the history of the base and a detailed description of the preparations and construction of it.
Chapter 2, by Prof. Dr. T.J. Kukkamäki and Prof. Dr. T. Honkasalo, is the most important part of this publication and deals with the measurements itself and the results. The authors preferred to omit from this publication the more technical description of the interference method and the instruments used. For details of the method etc. the reader is referred to the references at the end of this chapter.
Chapter 3 gives a short description of an auxiliary base constructed in 1960 for the calibration of invar wires of which the length was derived from the interference base.

This base makes it possible to calibrate in the Netherlands invar wires belonging to several institutes and survey departments which until 1957 had to be done in other countries. The Loenermark base has in particular proved its usefulness when in 1960 in German-Dutch collaboration the base of the German primary triangulation near Meppen was remeasured. Use has also been made of the base for the calibration of the rapidly increasing number of instruments for electronic distance measurements.
Prospective users of the standard base are kindly invited to contact the Netherlands Geodetic Commission, Kanaalweg 4, Delft who will gladly give the necessary information.

This is also the place to thank all who contributed to the realization of this base and the publication of its result. First of all sincere gratitude may be expressed to Prof. Dr. T.J. Kukkamäki and to Prof. Dr. T. Honkasalo and through them to the Finnish Geodetic Institute for the measurements and computations. The generous offer of contributing their time and instruments to this work is gratefully acknowledged. The cooperation of the municipality of Apeldoorn who permitted the construction of the base on her territory is greatly appreciated. Sincere thanks are also due to the engineering firm Grabowski and Poort and to the contractor Mr. Reusken who were always willing to comply with the sometimes unusual requests in the design and construction of the base and the sudden wishes of the geodesists in charge.
Many thanks are due to Ir. G. Bakker and Ir. G.L. Strang van Hees for reading the manuscript and suggesting several improvements.
Last but not least thanks are due to Mr. N. van der Schraaf and Mr. H.C. van der Hoek for correcting the manuscript and preparing the lay-out and to the printer W.D. Meinema N.V., who all contributed to give this edition its present form.