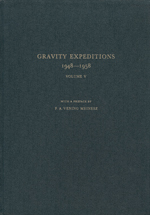 After the second World War, the Netherlands Geodetic Commission again took up the organization of gravity measurements at sea. The method of measurement and the apparatus which were developed and used during the years 1923 - 1938 by Prof.Dr. F.A. Vening Meinesz, resulted during that period in the observation of gravity in 844 stations published in: F.A. Vening Meinesz, Gravity Expeditions at Sea, Volume IV, 1923 - 1938, Delft, 1948. Because of the war this investigation was interrupted for ten years, but on the initiative of Prof. Vening Meinesz it was continued in 1948, although he then judged that younger observers should take his place. As before the war, the Royal Netherlands Navy gave its full cooperation to make this scientific work possible. Sincere thanks are expressed for this help, which must be valued the higher as after 1945 the number of submarines of the Royal Netherlands Navy was reduced and consequently there was less opportunity for making a vessel available for gravity expeditions.

The previous volumes I - IV of this series "Gravity Expeditions at Sea" contain only observations made at sea, however this volume V contains also gravity observations on land. These measurements on land were made in Surinam (Dutch Guyana) with an Askania gravimeter type Gs. 9, which was purchased by the Netherlands Geodetic Commission in 1956.

The following expeditions were made in chronological order:

It must be remarked that on the expeditions d. and g., mentioned above, the observations were not made in a submarine because of the shallowness of this part of the North Sea. Not the pendulum apparatus of Prof. Vening Meinesz was used there, but a North-American gravimeter equipped with Robert Ray remote control, which was let down to the sea-bottom. The Royal Netherlands Navy kindly put the frigates Hr. Ms. "Vos" and Hr. Ms. "Fret" at the disposal of these expeditions.
Because the depth of the North Sea increases considerably towards the north, a number of supplementary pendulum observations were made by submarine in the autumn of 1956, so that a complete picture of gravity in the North Sea was obtained.

This publication is divided into three parts:

Part I contains the expeditions in the Atlantic Ocean and in the Caribbean during the years 1948, 1949 and 1951 by the observers G.J. Bruins, R. Dorrestein and H.J.A. Vesseur (see under a., b. and C.) and the expedition in 1957 (see under h.) in the Caribbean and in the Pacific by the observers G. Bakker and L. Otto. These expeditions can be considered as the actual continuation of the work of Professor Vening Meinesz. The observations of these expeditions have been numbered Nr. 845 - 1032, as the last observation in Gravity Observations at Sea, Volume IV, was Nr. 844. A geophysical interpretation of the results of the expedition h. by Prof. Vening Meinesz has been added; it is followed by tables of the numerical results. These tables are arranged in the same way as those in Volume IV.

Part II contains the expeditions d., e. and g. on the North Sea, observer B.J. Collette. The observations have been numbered No. 1033 - 1293 followed by a geophysical interpretation and tables of the results.

Part III contains the expedition f. in Surinam, by J. Veldkamp, with the Askania-Gravimeter Gs. 9. These observations on land have not been numbered. At the end of this part the results have been printed.

The following remarks are made with regard to the tables of anomalies and reductions :
a. In accordance with the recommendation by the Union Géodésique et Géophysique Internationale, the observations have only been reduced by the method of Airy-Heiskanen (R = 0) and not by the method of Hayford-Bowie. Reductions were also computed for regional compensation with radii R = 29.05, 58.1, 116.2, 174.3 and 232.4 km. The indirect effect (Bowie-correction) was not computed either.
b. The topographic and isostatic corrections have been interpreted as corrections to measured gravity, and not as corrections to normal gravity, so that the sign of these corrections is opposite to that of the corrections in Gravity Expeditions at Sea, Volume IV.

Part III, Measurements of gravity in Surinam  97
by J. Veldkamp