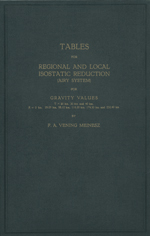 The purpose of this publication is to give tables for the gravity effect of the isostatic compensation according to the Airy hypothesis of a floating crust and assuming a regional distribution of the compensating masses. For making the tables more complete and in order to allow a better comparizon, a first column has been added to the tables corresponding to local compensation. The figures of these last mentioned columns are identical to those of the well-known tables of Heiskanen for the Airy system of reduction. The further columns of each table correspond to five different degrees of regional spreading of the compensation, the radii R of the areas of spreading being successively 29.05 km, 58.10 km, 116.20 km, 174.30 km and 232.40 km.

Three sets of tables have been computed, viz for a normal thickness T of the crust of 20 km, of 30 km and of 40 km; these figures represent the thicknesses of the crust assumed for zero elevation. We have based the tables on the supposition of Airy of a rigid crust floating on a denser plastic substratum and we have adopted Heiskanen's figures, 2.67 and 3.27, for the densities of the crust and of the substratum, the crustal density being assumed to be constant over its full height. The differential density of the compensation has, therefore, been assumed to be ± 0.6. We have further adhered to the physical supposition of the hydrostatic equilibrium of the crust and so we assumed equality of pressure in the deeper layers below the crust. Neglecting the increase of gravity with depth, this corresponds to a vertical dimension of the compensating root for local compensation of 2.67/0.6 = 4.450 times the topographic elevation h and of 1.642/0.6= 2.737 times the sea-depth d. Because of the converging of the verticals this assumption does not correspond to the exact equality of mass with opposite sign of the topography and of the compensation, and so we must be aware that the topographic and isostatic reduction according to these tables slightly changes the mass of the Earth. We have to take this e.g. into account in the first factor of the formula for normal gravity, which, strictly speaking, should have to be slightly different for gravity values reduced according to different assumptions of the depth of compensation.