Gravity expeditions at sea 1934-1939. Vol. III. The expeditions, the computations and the results 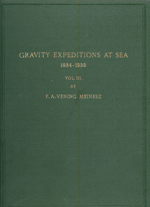 This publication contains a report of the gravity at sea expeditions of the Netherlands Geodetic Commission in the years 1934 to 1939. It gives an account of the expeditions, the observations, the computation of the results and of their mean errors; the last table lists the gravity reduced to sea-level found at the 388 stations that have been occupied during these trips, thirty of which have been observed on land by means of a Holweck-Lejay apparatus. A following publication, Vol IV, will contain the isostatic reduction according to different methods of the gravity results of these and former expeditions at sea: it will include maps giving the location of the stations dealt with in this report and it will investigate different possibilities of interpreting the results.