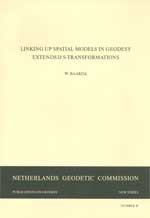 2. A preliminary consideration of the three-dimensional S-coordinate frame preferred by the author.

4.1 Again the connection between gravimetric and geometric theory, treated sketchily but with concentration on the fundamentals. The linking up of a mathematical model by dimensionless quantities. An objectionable interpretation of compound quantities as "free-air reduction to the geoid". A more appropriate definition of "relative sea-topography".
4.2 An analysis of the modified integral formulas of Stokes and Hotine, based on ideas of Rummel and Teunissen. A choice for the present satellite era. The lasting influence of the transition from sea to land.
4.3 The influence of PMPC ≠ 0, PC being the centre of mass of the earth and PM the origin of a quasi-centric S-coordinate frame for terrestrial data.
4.4 Once more the integral formula of Hotine. Effects of first degree spherical harmonics. A suggestion for application. An afterthought.

5. Supplementary remarks on the linking up of the gravimetric-geometric model. Correction terms in the modified integral formulas of Stokes, Hotine and Vening Meinesz, deviating from the terms found in the literature.

7.1 A sketch of problems in point positioning on the earth by means of satellite observations.
7.2 The effect of PMPC ≠ 0 on launch data of a satellite.
7.3 Correction of DΠ-quantities (orbit data) for earth rotation.

8.1 An alternative way of writing the formulas of the Kepler ellipse for the computation of a satellite orbit. Difference formulas for dimensionless quantities, such as the dimensionless time interval.
8.2.1 The linking up of the mathematical model from section 8.1. The influence of PMPC ≠ 0.
8.2.2 Comparison of the S-system in satellite orbit computation with the S-system in physical geodesy; possible small differences in scale in mass, potential and time.
8.2.3 Questions arising when rewriting the higher-order terms of orbit computations by means of the dimensionless quantities introduced.

9.1 Establishment of control by satellite measurements. The bird's-tail construction. Difference formulas with an appraisal of the influence of PMPC ≠ 0.
9.2 An investigation into possibilities for the estimation of PMPC ≠ 0.
9.3.1 A more realistic process of measurement by means of series of pseudo-distances (distance measurements from one station with the same but unknown length scale).
9.3.2 Synchronous measurements in several stations, with an estimation of the maximum distance between stations if a (practically acceptable) elimination of the influence of orbit errors is to be attained. Measurement of the distance differences.

10. A short after-consideration. The application of dimensionless quantities in satellite gradiometry.

11. Concluding word with remarks concerning relativity theory, a possible influence of the choice of terrestrial datum points on the precision of the determination of points of satellite orbits, doubts about the alleged precision of computed quantities in physical geodesy obtained by satellite gradiometry.