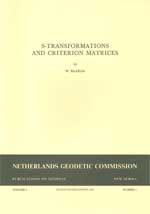 In the publication "A Testing Procedure for Use in Geodetic Networks" [9] a sketch was given for a possible programme of subjects to be studied in Special Study Group No. 1.14 * of the International Geodetic Association. This was an extension of first ideas expressed in 1962 [4a], with a supplement in [4]. Three main problems were formulated:

(1.1) the construction of an artifical covariance matrix, to serve as a mathematical translation of the lower limit of precision required by the purposes of geodetic networks;
(1.2) the use of statistical tests in connection with the adjustment of networks in order to assure the reliability of geodetic networks in relation to their purpose in society; (1.3) the consequences for geodetic networks of a relativation of the concepts north and time.
In [9] {see also [10] for basic theory}, a first solution for (1.2) was given, which since then has been applied to the computation of many densification networks in The Netherlands. The results were very satisfactory, but the method has so far not led to reactions from the members of S.S.G. No. 1.14, and has received little attention from geodesists outside The Netherlands.

The present paper presents a solution for (1.1), a consistent theory which replaces the first draft discussed in November 1964 at Stockholm with the then President of S.S.G. No. 1.14, Professor L. Asplund. The theory has been developed since 1962 by the author and J. E. Alberda, along seemingly very different lines. Many discussions have first led to an improvement of individual ideas, and then, when in 1969 the present paper was drafted, to the insight that the two theories must be identical in essence. A separate publication by Alberda is to be expected; perhaps the differences in argumentation will lead to a clarification of the rather difficult line of thought.

Both researchers also used the criteria for the form and the size of standard ellipses of coordinates of points in a network, which were more or less sketchily formulated by Baarda in the HTW-1956. Alberda chose the way of a further consistent elaboration of this formulation, whereas Baarda in the first instance rejected the approach of the HTW-1956, because it was in conflict with studies on model theory, such as given in [4], section 4, and in the 'Polygon Theory in the Complex Plane' [2].

*) S.S.G. No. 1.14: Specifications for Fundamental Networks in Geometric Geodesy.

15a. Criterion matrices in systems for horizontal control. Δd2-terms. An alternative derivation  100