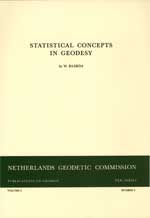 In this paper the starting point is formed by some elementary applications of statistical methods to geodetic adjustment problems. In its line of thought the paper is connected to earlier publications, such as [Baarda 1960, 62]. An indication is given of some difficulties of principle which are inherent in these applications, and which often make the value of tests illusory. This leads to what the author in recent years has come to consider as the central problem of geodesy, viz. the introduction (linking-up) of mathematical models for the description of measured quantities and their relations, including the possibility of choice between different but related models.

These thoughts have been directive for the design of several new geodetic theories, one of which, the so-called 'polygon theory in the complex plane' is now nearly complete both from a theoretical and practical point of view. An impression of this theory has been given in the paper 'A Generalization of the Concept Strength of Figure', which was written in 1962 for the I.A.G. Special Study Group No. l: 14, now included as an appendix. This paper also gives an impression of the possibilities (and difficulties) of a quantification of the objectives of geodesy. Other aspects of this theory are treated by Krijger [1966].
Mention should be made of a different approach to these problems, which is based on decision theory and of which Alberda [1966] gives an outline. An interesting problem for the years to come will be to find the line of thought connecting these approaches.
The author is much indebted to Ir. J.E. Alberda for his translation of the manuscript and for his stimulating remarks in discussing the underlying theory.

4. Model Theory. A tentative approach
4.1 Experiment and model 44
4.2 Considerations concerning the linking-up of a model of functional relationships 45
4.3 Further considerations 52

A Generalization of the Concept Strength of Figure