A Domain Model for Land Administration 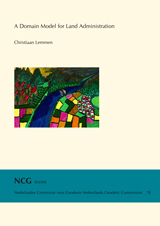 A Domain Model for Land Administration is designed in this thesis. There is a need for domain specific standardisation to capture the semantics of the land administration domain on top of the agreed foundation of basic standards for geometry, temporal aspects, metadata and also observations and measurements from the field. A standard is required for communication between professionals, for system design, system development and system implementation purposes and for purposes of data exchange and data quality management. Such a standard will enable GIS and DBMS providers and/or open source communities to develop products and applications for Land Administration purposes. And in turn this will enable land registry and cadastral organisations to use the components of the standard to develop, implement and maintain systems in an even more efficient way. The research objective is to design a Land Administration Domain Model (LADM). It should be possible to use this model as a basis for Land Administration System (LAS) development. Such a LADM has to be broadly accepted and it should be adaptable to local situations. It has to be usable to organise Land Administration data within a Spatial Data Infrastructure (SDI). The design is based on the pattern of 'people - land' relationships. The model should be as simple as possible, it should cover the basic data related components of Land Administration (legal/administrative, mapping and surveying) and it should satisfy user requirements. The Domain Model in its implementation is can be distributed over different organisations with different tasks and responsibilities.

This research does not focus on the legal, political, economic, institutional or financial aspects of Land Administration and Land Administration organisations; at least as far as those are not related to user requirements for the model. Taxation, valuation and land use are knowledge fields in itself and are not within the focus of this thesis.

Chapter 1 gives an introduction to the subject of this research. Motivation and background, research objectives and questions, the methodology and the scope and limits are presented. Chapter 2, a review of existing work in LA Modelling, provides the results of a literature review on people to land relationships from modelling and land policy perspectives and comprises a discussion on common patterns in this relationship. The core of the thesis is in Chapter 3: the design and construction of the land administration domain model. Three main versions (A, B and C) are introduced with evolving and more and more refined user requirements included. In Chapter 4 experimental results are presented from prototype software. Implementations: first Examples of LADM are discussed in relation to international attention in several countries and within the INSPIRE and the (agricultural) Land Parcel Identification System of the European Union development in Chapter 5. Chapter 6 gives an overview of conclusions and future work.

The design of the LADM took place in an incremental approach. For the presented Versions A and B this concerns input from workshops, personal experience, other expertise and improvements from reviews of publications and for the Version C of the LADM the development process for International Standards. After preparatory works of almost six years the LADM has been submitted to the ISO and parallel to CEN. After positive results of voting on the so-called New Working Item Proposal (NWIP) in May 2008 and on the Committee Draft (CD) in October 2009 the Draft International Standard (DIS) received a positive vote in June 2011; the International Standard is expected in August 2012. The Draft International Standard is called LADM Version C in this thesis. The developments in ISO are a comprehensive, extensive, formal process with a continuous review and a continuous, creative approach to find common denominators in land administration systems, including data sets. Many comments and observations have been processed to bring the LADM to the required quality level needed for international acceptance.

The Draft International Standard, published by ISO as ISO 19152, covers basic information related to components of land administration (including water and elements above and below the earth's surface). It includes agreements on data about administrative and spatial units, land rights in a broad sense and source documents (e.g. deeds or surveys). The rights may include real and personal, formal rights as well as indigenous, customary and informal rights. All types of restrictions and responsibilities can be represented. The draft standard can be extended and adapted to local situations; in this way all people – land relationships may be represented.

The three main packages of the LADM consist of the Party package, the Administrative package and the Spatial Unit package.

The main class of the party package of LADM is class LA_Party with its specialisation LA_GroupParty. There is an optional association class LA_Party- Member. A Party is a person or organisation that plays a role in a rights transaction. An organisation can be a company, a municipality, the state, or a church community. A 'group party' is any number of parties, forming together a distinct entity. A 'party member' is a party registered and identified as a constituent of a group party. This allows documentation of information to membership.

The administrative package concerns the abstract class LA_RRR (with its three concrete subclasses LA_Right, LA_Restriction and LA_Responsibility), and class LA_BAUnit (Basic Administrative Unit). A 'right' is an action, activity or class of actions that a system participant may perform on or using an associated resource. Examples are: ownership right, tenancy right, possession, customary right or an informal right. A right can be an (informal) use right. Rights may be overlapping or may be in disagreement. A 'restriction' is a formal or informal entitlement to refrain from doing something; e.g. it is not allowed to build within 200 meters of a fuel station; or a servitude or a mortgage as a restriction to the ownership right. A 'responsibility' is a formal or informal obligation to do something; e.g. the responsibility to clean a ditch, to keep a snow-free pavement or to remove icicles from the roof during winter or to maintain a monument. A 'baunit' (an abbreviation for 'basic administrative unit') is an administrative entity consisting of zero or more spatial units (parcels) against which one or more unique and homogeneous rights (e.g. an ownership right or a land use right), responsibilities or restrictions are associated to the whole entity as included in the Land Administration System. An example of a 'baunit' is a basic property unit with two spatial units (e.g. an apartment or a garage). A 'basic administrative unit' may play the role of a 'party' because it may hold a right of easement over another, usually neighboring, spatial unit.

The spatial unit package concerns the classes LA_SpatialUnit, LA_SpatialUnitGroup, LA_Level, LA_LegalSpaceNetwork, LA_LegalSpace- BuildingUnit and LA_RequiredRelationshipSpatialUnit. A 'spatial unit' can be represented as a text ("from this tree to that river"), a point (or multi-point), a line (or multi-line), representing a single area (or multiple areas) of land (or water) or, more specifically, a single volume of space (or multiple volumes of space). Single areas are the general case and multiple areas the exception. Spatial units are structured in a way to support the creation and management of basic administrative units. A 'spatial unit group' is a group of spatial units; e.g.: spatial units within an administrative zone (e.g. a section, a canton, a municipality, a department, a province or a country) or within a planning area. A 'level' is a collection of spatial units with a geometric and/or topologic and/or thematic coherence. The Spatial Unit Package has one Surveying and Spatial Representation Subpackage with classes such as LA_SpatialSource, LA_Point, LA_BoundaryFaceString and LA_BoundaryFace. Points can be acquired in the field by classical surveys or with images. A survey is documented with spatial sources. A set of measurements with observations (distances, bearings, etc.) of points, is an attribute of LA_SpatialSource. The individual points are instances of class LA_Point, which is associated to LA_SpatialSource. 2D and 3D representations of spatial units use boundary face string (2D boundaries implying vertical faces forming a part of the outside of a spatial unit) and boundary faces (faces used in 3D representation of a boundary of a spatial unit). Co-ordinates themselves either come from points or are captured as linear geometry.

Implementation of the LADM can be performed in a flexible way; the draft standard can be extended and adapted to local situations. External links to other databases (supporting GII type of deployment), e.g. addresses, are included. Legal implications that interfere with (national) land administration laws are outside the scope of the LADM.

The objective of this research has been achieved; the research questions have been answered. Validation has been performed. The fact that many experts have been involved in the LADM development - with a lot of experience in developments and implementations of LASs - is a solid basis. Their acceptance is very promising. Also developments in Cyprus and with FLOSS SOLA, an OpenSource Software development at the Food and Agricultural Organisation and the development of the Social Tenure Domain Model (a LADM specialisation) at UN-HABITAT are promising. Relevant is the attention of commercial software suppliers to the LADM development. There are proposals for implementation of the LADM in several countries already, even before it has been published as an International Standard. More testing is required. Data exchange requires further attention in testing of the LADM.

Future work in relation to the LADM can be the development and inclusion of New RRRs, 3D and 4D Cadastre, linking into augmented reality applications, support in spatial design and support in monitoring spatial changes worldwide. Further standardisation (other domains and processes) and LADM maintenance is important, especially for the development of mature information infrastructures.