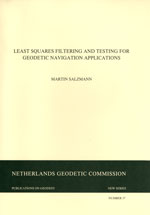 This thesis deals with the data processing, testing, and design procedures for use in dynamic systems, particularly integrated navigation systems, and provides a unified theoretical framework for these procedures. The data processing procedure - the Kalman fllter - is analysed from a least squares point of view as this method provides a better understanding of some aspects of the Kalman filter, especially the cases where correlation between the observables is present and for non-linear filtering

The testing procedure is derived from the theory of hypothesis testing in linear models and is based on generalized likelihood ratio tests, which are shown to be optimal within a certain class of tests. The testing procedure is especially suited for additive model errors in the functional model, and consists of three parts, namely detection, identification, and adaptation (DIA). In the detection step the overall validity of the model is checked and possible model errors are identified in the identification phase. The adaptation step is required to maintain the optimality of the real-time filter in the presence of model errors. The detection and identification steps correspond to the testing procedure used in geodetic network analysis. The DIA procedure allows local and global (covering several epochs) testing and can be implemented recursively, and consequently very efficiently. The DIA procedure constitutes the quality-control step in an overall data processing strategy for dynamic systems.

A design study in which the quality of the system is quantified should precede the implementation of the DIA procedure. In the design procedure the important aspects to consider are the quality of the estimation result under nominal conditions (described by the precision) and the sensitivity of the estimation result to undetected model errors (called the reliability). Reliability of the dynamic system is directly related to the implemented testing procedure. Measures for precision and reliability are discussed. The optimization of the design has to be performed with respect to the precision and reliability, and some suggestions for a design procedure for use in dynamic systems are made.

The DIA and design procedures are validated in an extensive simulation study based on a simple linear model and a (hydrographic) navigation system. This study shows that the quality of the system mainly depends on the precision of the observables and the level of integration in the dynamic system. The quality of a system can be improved by using more precise observables and by increasing the level of integration. Based on the design study recommendations on the window lengths of the tests can be given. It is shown that tests for slips require longer window lengths than tests for outliers. The detection and identification steps of the DIA procedure work very well, even in the presence of multiple errors. The adaptation procedure is validated for local tests. Adaptation works well for outliers, but an adaptation procedure for slips should be implemented with care. The testing and design studies show that the correct specification of likely model errors by means of alternative hypotheses is a crucial element in model validation techniques for dynamic systems.

The least squares (Kalman) filter and the DIA procedure with its associated design procedure are important building blocks of a real-time data processing and quality assurance procedure for dynamic systems.