On the principles, assumptions and methods of geodetic very long baseline interferometry 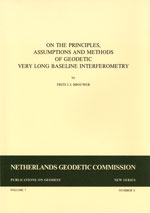 The accuracy of geodetic VLBI point positioning measurements is assessed. The assessment is based on a software package developed for the purpose which incorporates all possible computing models for geodetic VLBI data analysis. Analysis of real and simulated data with this package shows that an accuracy of 10 cm in point positioning has been achieved with the ERIDOC and MERIT Short Campaign observing campaigns. This analysis has also led to the formulation of criteria for optimum design of a geodetic VLBI observing campaign, and to a general approach for evaluating experiments designed to compare VLBI with other geodetic techniques, because the ultimate accuracy of world-wide geodetic measurements for geodynamics and positioning can only be achieved by a combination of several techniques.

The DEGRIAS (DElft Geodetic Radio Interferometry Adjustment System) software package and the background of its development are described in the first three chapters of this publication. The package is the outcome of a desire to incorporate geodetic VLBI into the system for the design and computation of geodetic networks developed at the Delft Department of Geodesy, commonly known as the Delft Approach. Chapters 2 and 3 provide descriptions of the general and specific features of DEGRIAS respectively. Under general features is included a sketch of all physical phenomena relevant to VLBI observations, and the basic equations for the delay and delay rate observables in the commonly used computing model, the kinematic model. An analysis is given of the achieved level of precision of DEGRIAS in modelling the phenomena that constitute the "real world" of geodetic VLBI. The more detailed description in chapter 3 includes discussion of linearisation of the equations for delay and delay rate and a discussion on the rank deficiencies of the system of normal equations in the Least Squares adjustment. Chapter 3 also presents the results of applying DEGRIAS to the VLBI data of ERIDOC (European Radio Interferometry and DOppler Campaign) and part of the MERIT (to Monitor Earth Rotation and Intercompare the Techniques of observation and analysis) Short Campaign.

The experience gained with this data analysis led to the consideration in chapter 4 of an optimized design for geodetic VLBI experiments. The SCHED-module of DEGRIAS generates a schedule of observations starting from visibility considerations for the sources and optimizing for slewing time. The design of an observing session also has to be optimized with respect to precision and reliability. The literature is mainly concerned with the precision of geodetic VLBI, hence in this study, much attention has been paid to its reliability. Simulation studies and analysis of real data has uncovered estimates of magnitudes of errors that may be present in individual observations, or in groups of observations, and which cannot be detected by statistical testing. Based on studies performed on the network designs for global networks from [Dermanis, 1977], for the MERIT Short Campaign and for a possible European Geodynamics Network, the following conclusions have been reached concerning the design of an experiment:

In chapter 5, the main computing models for geodetic VLBI are investigated. As discussed in chapter 2, modelling of nutation in the kinematic model is a troublesome aspect, together with refraction due to the wet component of the troposphere and to the dry component at low elevations, and instrumental effects. Ways of minimizing the risks of these errors have been sought by considering alternative computing models. The model with the least number of possible hypotheses for the description of the physical phenomena is the geometric model. This model makes use only of
the simultaneity of measurements of several CO-observing baselines. The idiosyncrasies of this model regarding precision and reliability are discussed. On practical grounds, an intermediate model, called short-arc computing model, is also presented, which models precession etc. only
during short intervals of time. Computing results with the three types of models (geometric, short-arc, kinematic) are presented both for the European Geodynamics Network and for the MERIT Short Campaign. It is concluded that the geometric model - although very attractive from a theoretical point of view - is hardly applicable in practice. The short-arc model, however, can be considered as a promising alternative to the common kinematic one.

In Part II, a general approach is studied to combine and compare two sets of 3-dimensional Euclidean coordinates for a number of stations. The differences in coordinates can, apart from their random character, be the result of either a systematic bias between two applied measurement techniques (intercomparison of techniques) or of a shift in position of one or more of the stations (deformation analysis). It is concluded that any comparison method should rest on a sound statistical basis. In chapter 6 an approach to intercomparison, based on the similarity transformation, is discussed which combines all the required qualities. The software developed for this approach (called FUSION) is also described in this chapter. It has been applied to analyse the differences between the Doppler and VLBI coordinates determined in the ERIDOC campaign, which were comparable at the 0.5 metre level. FUSION has also been applied to the European Geodynamics Network to establish what precision of measurement is required to detect possible (tectonic) motions of stations in the Mediterranean area reliably.