A testing procedure for use in geodetic networks 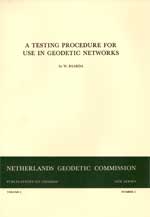 In this paper an outline for the continuation of the work in I.A.G. Special Study Group No. 1.14 is given, based on the paper "Statistical Concepts in Geodesy". As a first step, a testing procedure for geodetic networks is discussed, using one-sided F-tests; a definition of the concept "reliability of geodetic networks" is proposed.

1. The testing procedure is a part of the so-called unlinking of the computing model and consequently a part of the prediction. This new theory was developed to obtain a clearer line of thought in testing and to overcome existing confusion by pointing out the interconnection of consequences. The theory is as much as possible connected to current methods; the purpose was to find a theory applicable in practice.

2. For geodetic networks it is important to have the possibility to make checks soon after completion of the measurements in order to make partial remeasurements possible while towers and signals are still standing. Remeasurement shortly afterwards, even remeasuring slightly too much, will in the long run prove to be cheaper than hidden {gross} errors. The latter will often lead to strong local distortion of the network and render difficult the effective control of densification measurements or possibly even prevent that the objectives of such measurements are attained.

3. Because of the random character of observations it is impossible to signalize {gross} errors with certainty. At the best only statements having a certain probability of success, can be made. The order of magnitude of this probability βo, has to be agreed upon; it is one of the parameters in the theory. βo leads to a lower bound for the order of magnitude of a function λo of gross errors which can just be signalized by a test; λo is determined by one specified alternative hypothesis, provided that a second parameter is fixed. Multidimensional tests are reduced to a one-dimensional test via this particular alternative hypothesis. The second parameter then is the significance level αo of this one-dimensional test. The significance level α of a b-dimensional test is then dependent on b, if in combination with the same βo the same bound for the signalization of errors λo is required. This leads, on the one hand, to the designed testing procedure, and on the other hand to the definition of the "reliability of geodetic networks".

4. Planning the precision as well as the reliability of geodetic networks requires a quantification of the demands following from the purpose of the network. This quantification is the most difficult problem and it is certainly not solved yet. In view of the difficulty of foreseeing future applications of the network, it is questionable whether more than the formulation of partial or relative purposes and their quantifications can ever be attained. It will be necessary to come to a conclusion in order to make a justified choice of values {αo, βo}, possibly by applying the decision theory approach.

5. Methods for "data-snooping" follow from the reasoning developed. Connections with publications by Bjerhammer are given, whereas a comparison is made with related problems from mathematical statistics.

6. The reasoning is generally applicable and need not be restricted to geodetic networks.
It can also be applied when arbitrary distribution functions are used, possibly along with F-statistics, provided the power function of the tests can be computed. In this paper only the method using F-distributions has been worked out.